TV Guide's Michael Schneider posted a follow-up from Elizabeth McGovern about comments she made about season two of Downton Abbey.


As the Dowager Countess might say, "Good heavens!" Downton Abbey star Elizabeth McGovern is looking to clarify comments she says have now been misinterpreted as a slam against the hit PBS drama.

Speaking in New York at the Tribeca Film Festival to promote her new feature Cheerful Weather for the Wedding, McGovern admitted to the Los Angeles Times that season two of Downton had "a slightly different tone... partly because the show had to deal with this elephant which is the First World War" - and that meant that the writers "had to do a lot of glossing over the domestic life, and some of the small moments between characters that characterized the first season." She added that "the show in the first season was more to my taste than the show in the second season."

Several follow-up reports in the U.S. and the U.K. touted those comments as a knock against the show - but McGovern says those stories went too far. In a statement obtained by TV Guide Magazine from a spokesperson for Carnival Films, producers of Downton Abbey, McGovern - who plays Lady Cora Crawley, the American countess behind the massive Downton Abbey estate - seeks to set the record straight.

"I am horrified that my comments about the second series of Downton Abbey have been taken out of context and misinterpreted," she says. ["Seasons" are referred to as "series" in the U.K.] "I was in no way criticizing the second season or implying that I loved or enjoyed it less."

McGovern adds: "When asked about the second series, I said that the tone differed slightly from the first. There would be some people who would naturally prefer the more domestic detail of series one and others who would love the faster pace and heightened drama of the war years. That does not translate that series two was any less entertaining than series one - and many millions of people around the world agree with me."

Also, "Julian Fellowes is a brilliant writer and I am proud and privileged to be part of this show. The third season is so rich with character detail, storylines and new faces that I can't wait for people to see it."

Downton Abbey is expected to be a strong contender at this year's Emmy Awards. The third season is expected to air in the U.K. this fall and return to PBS next January.

On Set at Downton Abbey - SPOILERS

The filming of the third series of the award winning costume drama created by Julian Fellowes, continued today in Bampton,Oxfordshire. The main theme for today's filming was the second wedding of the series, of Earl Grantham's middle daughter Lady Edith. All major members of the cast were present including Dame Maggie Smith.


Source: Corbis Images
Posted by Kelly/Taiko at 8:50 AM No comments:

Shirley MacLaine spoke with The Daily Beast about the success of Downton Abbey.


One question she has been asking herself lately is why she and so many millions are fanatically gripped by the Masterpiece drama, Downton Abbey, in which she was recently cast. The publicity generated by her hiring prompted the producers of Downton to call her agent, ICM’s Jack Gilardi, to thank him. 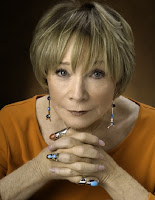 “She is so professional and very creative,” said Gilardi, who has represented her for 20 years. “She has a great gift understanding people. She knows how to make you tingle.”
She had never seen the series—but after watching the first two seasons, she was hooked. Now, she is muzzled by creator Julian Fellowes’s edict that no one from the cast can talk about Season 3: MacLaine, who will play Martha Levinson, Lady Cora Crawley’s mother, could not offer much insight.

“Why is this a hit? I haven’t come up with the answer,” she said. “I think Maggie Smith is one answer. I liked Upstairs Downstairs, but not like this. It is really worth an examination.”

Posted by Kelly/Taiko at 2:29 PM No comments:

Maggie Smith nominated for BAFTA. Why no one else? 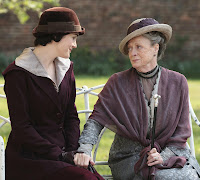 There's no doubt that Maggie is deserving of the nomination. The Dowager Countess has become a fan favorite. I only wonder why no one else was nominated. Michelle Dockery and Joanne Froggatt absolutely deserve it, as do many others in the large ensemble cast.
Posted by Kelly/Taiko at 1:02 PM No comments:

There have been rumors and false spoilers adrift for a while now about what's to come in season three of Downton. I've been trying to weed through fact and fiction to compile a comprehensive list of factual spoilers.

Here's what has been confirmed so far:

Anything else floating around out there I haven't been able to confirm and therefore won't post.

Follow this site to stay up with the current news.


The third season of "Downton" premieres in the U.K. in September and in the U.S. in January 2013.

All photos by Jeni Matthewman

In August 2011, as filming of Downton Abbey's second season was wrapping up, Elizabeth McGovern, Dan Stevens, and Michelle Dockery spent several days visiting the West Coast. During their whirlwind trip to San Francisco, they spoke with On Q's editor about their experiences filming the series. Find out what they did to prepare for their roles, which is their favorite room in the Downton house, and which question they're most tired of being asked.

LA Times reports that the rumors about Maggie Smith leaving Downton Abbey after the third season are false.


According to the report [in Britain's Daily Mail], Smith asked series creator Julian Fellowes to write her acid-tongued character out of the series so she could return to her career on stage and screen.

However, a representative for Carnival Film and Television Limited, co-producers of the hit PBS series says, "Series 3 is currently filming with Maggie along with the other cast. We do not comment on future story lines, however there is no truth in the story that Maggie is leaving the show."

What is assured is that someone will get written out of the show during the now-filming season. "Masterpiece" executive producer Rebecca Eaton was recently speaking to PBS supporters in Florida and revealed that the new season of "Downtown Abbey," taking place in the 1920s, would feature a birth and a death. "Somebody pretty key in the cast, unfortunately is not going to make it," she said according to the Orlando Sentinel.

She also addressed the status of Smith herself, whose on-set behavior doesn't sound too far off from that of the Dowager Countess herself. According to Eaton, "Maggie Smith is a handful, it's true. She's very difficult. She knows her worth, and she's tricky on the set, but she delivers when the time comes."

Posted by Kelly/Taiko at 6:09 PM No comments:

April 12, 2012
Michelle and Dan shooting a scene from season three. Their vintage car breaks down in the middle of filming and a security guard has to be called to give them a helping hand.