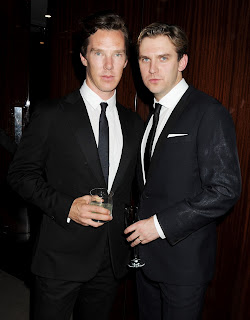 I love when fandoms collide. 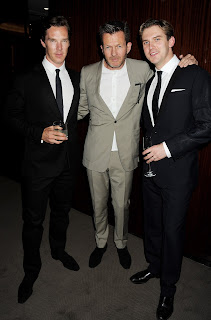 Posted by Kelly/Taiko at 8:15 AM No comments:

Joanne Froggatt poses in front of the winners boards at The 2012 Arqiva British Academy Television Awards at the Royal Festival Hall on May 27, 2012 in London, England.

Photos: Tim Whitby
Posted by Kelly/Taiko at 7:57 AM No comments:

Michelle Dockery took a break from filming the third series of “Downton Abbey” to attend Burberry men’s wear show in Milan. “We’re over halfway through the filming, and we’re moving into the Twenties now — it’s very feminine and the corsets are definitely softer. we feel much more free!” said the actress.

In mid-August, Dockery will begin filming “Restless,” alongside Charlotte Rampling and Hayley Atwell. The two-part BBC mini-series is based on the prize-winning espionage novel by William Boyd. Dockery is to play a young woman who discovers that her Russian mother worked for the British secret service.

Posted by Kelly/Taiko at 7:47 AM No comments:

Elizabeth McGovern introduced the clip of third season Downton Abbey featuring Shirley MacLaine as her mother. There's been lots of anticipation from fans waiting to see Shirley and Maggie Smith on screen together. Will their characters get along? Here's a brief clip from TV Land of their first scene together.

AFI's Shirley MacLaine Tribute: See Her 'Downton Abbey' Debut
Posted by Kelly/Taiko at 7:07 AM No comments:

Downton Abbey's mother and daughter are teaming up to record an album for release later this year. This information was released in January. I don't know how I missed it. I love Michelle's voice and know that Elizabeth's band is quite a hit. I can't wait to hear them together.


Dockery, 30, is recording an album of songs with Elizabeth McGovern, 50, who plays her mother, the Countess of Grantham, in ITV’s popular period drama. 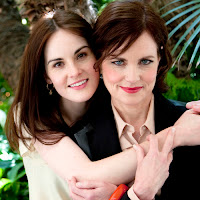 “It’s going to come out later in the year,” McGovern tells Mandrake at a private screening of the film My Week With Marilyn, hosted by Colin Firth at the Covent Garden Hotel. Dockery says: “It’s been so much fun. Elizabeth is a great songwriter.”

The Essex-born actress performed a memorable on-screen duet with Crawley, played by Dan Stevens, a columnist on The Sunday Telegraph’s Seven magazine. Away from the cameras, Dockery, who lives with her boyfriend, an architect, in fashionable Clerkenwell, prefers to sing jazz and has performed live with McGovern’s band, Sadie and the Hotheads.

Dockery to star in BBC's Restless

The two-part film - based on the book by William Boyd - will also star Hayley Atwell and Charlotte Rampling, playing the same character more than 30 years apart.

Acclaimed theatre director Edward Hall is to dramatise the tale about a female spy on the run who has led a double life for three decades.

Michelle plays a young woman, Ruth Gilmartin, who learns that her mother Sally (Charlotte) was recruited by the British Secret Service at the start of the Second World War, but has been in hiding since a mission went awry.

Hayley - who plays the younger Sally - has previously starred in a Channel 4 adaptation of Boyd's Any Human Heart.

Boyd said: "To have the chance to film a novel like Restless over three hours is the sort of opportunity that only a television adaptation can provide. It represents the most enticing and alluring of possibilities - not only to tell an enthralling story of wartime espionage, love and betrayal but also to lift the lid on one of the last secrets of the Second World War."

It begins filming in South Africa and the UK this summer and will be screened later this year.

Source: The Press Association
Posted by Kelly/Taiko at 6:37 AM No comments:

Five things to learn about Joanne: 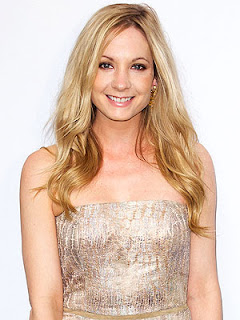 1. She grew up on a farm.
Froggatt, 31, grew up on a small farm in north Yorkshire, near the English border with Scotland, where she helped with the chores and played on the desolate landscape with her older brother.

"My dad had a flock of sheep, which he used to milk, and then my mum used to make cheese and yogurt out of the sheep's milk and sell it. It was kind of an unusual upbringing really," she says. "It's very kind of Wuthering Heights where my parents house is, moors and deserted, really. It's very wild and mystic. When the wind is going and the rain is lashing down, there's something so romantic about the whole place."

2. She's getting married.
Fiancé James Cannon runs his own I.T. company, and is understanding of the demands of Froggatt's show-biz career. The couple are set to marry later this year, and Froggatt has been frantically balancing wedding planning with filming the show and her upcomings movies, Filth (with James McAvoy and Jim Broadbent) and the indie Still Life.

"But this is what you hope for, really – you've just got to take these times and enjoy them and grasp them by the horns and go with it because there will be quiet times again in the future," she says. "But I'm enjoying every minute of it at the moment."

3. The Downton Abbey cast get along famously
Don't confuse the class divide on the show with what happens once the cameras stop rolling. The cast members "get along like a house on fire," Froggatt says.

"There's definitely been a few nights on the town with a bit of dancing involved," she says.

4. She got an up-close look at the much-anticipated dramatic fireworks between newcomer Shirley MacLaine and Maggie Smith.
"This scene I was in, there's an amazing little conversation between the two of them, a sort of snipey conversation," Frogatt says. "It was like watching these two legends at work. It was one of the most special days I think I've ever had on set. It was magical."

5. Anna Bates will come into her own.
Season 3 doesn't air in the United States until January, but Froggatt offers a sneak peek.

"You do see her grow up that little bit more, and she's a married lady now, she's Mrs. Bates. She moves in to a more senior position in the house and she kind of becomes a woman," Froggatt says. "And obviously her and Mr. Bates are having their turmoils again, so she's fighting to free her man as well."

Source: People
Posted by Kelly/Taiko at 6:27 AM No comments: