Michelle Dockery in The Hollow Crown 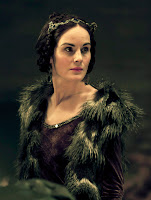 The films tell the rise and fall of three Kings and how their destiny shaped Britain's history. They are directed by Rupert Goold, Richard Eyre and Thea Sharrock. The three kings are played by Ben Whishaw, Jeremy Irons and Tom Hiddleston respectively.

Executive producer Pippa Harris says: “The Hollow Crown shows the trials and tribulations and the murderous backdrop behind our own history. It seemed particularly fitting to us to produce the films in 2012: whilst these four plays collectively say so much about Britain, the global appeal of Shakespeare is never-ending. Our phenomenal cast and crew have brought a vivid and inspirational edge to Shakespeare for a worldwide audience.”

Posted by Kelly/Taiko at 7:10 AM No comments: